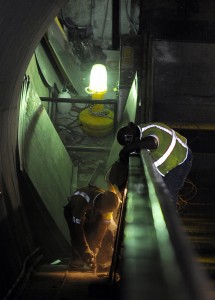 WASHINGTON, DC – MARCH 14:
Construction workers Natividad Villatoro, left, and Carlos Melgarejo cut out sections of the granite at the Dupont Circle South Metro Station on March 14, 2012 in Washington, D.C. Metro is replacing its aging escalators at the Dupont station which will involve work lasting at least until October 2012. The work has already begun and Metro says that the new escalators will improve safety, maintainability, and dependability. There are three 220 foot escalators that have to be replaced at the south entrance to the station. (Photo by Ricky Carioti/The Washington Post)